Rita R., Sacramento County CA
"Dear Barbara, Mike and Tom,
My Niece brought me a box of Semifreddi's Almond Biscotti when she came to visit her mom (my sister). These were the best biscotti I ever ate. They were sure good. I loved the little red and gold box and had the biggest laugh at what the box said - 'This cookie kicks butt!' You are not kidding!
A good cup of coffee and a box of Semifreddi's almond biscotti sure make this 81 year old great grandma happy!"
Stacey S., Bay Area CA
"Hi Semifreddi's!
I wanted to tell you that your customer service department did a great job with my client orders this year and last year. My clients love your biscotti.
Cheers!"
Ruby M., CA
"I'm smiling!
I've had your Sweet Baguettes since 2003 when my manager first discovered your store. I have not been the same since.
You figure after enjoying these baguettes for over 10 years I'd be a floating barge. Nope! Still enjoying them! And today, I actually read the writing on the side of the package - does anyone else see the clever personal touch you put there?
Just wanted to tell you how delicious and wantonly your baguettes taste... and wish you many more years of great baking for the community."
Alexandria J., San Diego CA
"I just have to write you a note of gratitude for making the best sweet baguette I have ever had. EVER. I bake my own bread at home and mine doesn't even come remotely close to yours.
We are moving from the Bay Area, and your baguettes top my list of things I will miss... I could almost cry right now at the thought that I'll have to find a "replacement baguette" in San Diego, because nothing has ever come close to yours.
Thanks for making an AMAZING product!"
Rabbi Yonah, Los Angeles CA
"The best bread in California. Worth the trip from LA!"
Noel S., Georgetown TX
"I recently had the pleasure of dining at Fior D' Italia in San Francisco. Of course the entire meal was delicious, but the bread was out of this world. They informed me it was Ciabatta from your bakery.
Thank you so much for your great products!"
Ursula Y., Los Gatos Methodist Church
"I wanted to let you know how much our senior group enjoyed the tour. We were fascinated by the process of making all the various breads and pastries, but also impressed with the set up of the facility and the environmentally clean process.

Some of our members are working with the social justice group at church and needless to say the way you incorporate profit sharing, workers compensations and benefits into your employment plan has pleased us very much. The engineers in our group were impressed with the automated processing of the bread to the oven and the clean handling of the dough.

We loved the fact that your bread is always fresh and you don't use chemicals.

A special thank you also to our tour guide and all the information about the history of the bakery."
Larry S., Martinez CA
"I have never done this before in my life and I am 69 years old, I just want to tell you that your breads are among the best I have ever had the pleasure of eating.

...Being brought up in the Bronx, and being Jewish, I know all about rye breads and yours is indeed right there.
With warmest regards and all due respect."
Marcella Hazan, Cookbook Author
My dear Tom,
Your biscotti di Prato are marvelous, deliciously crunchy, croccantissimi we would say in Italian, and packed with a million almonds. One more reason to regret not having moved to San Francisco.
Thank you for such a generous sampling.
Very best wishes.
Leah Garchick, San Francisco Chronicle
One recent Saturday, we drove over to Alameda for a tour of the Semifreddi bakery, conducted by brothers-in-law Tom Frainier (whose card calls him "chief boot licker"), and Mike Rose ("mad scientist"); along with Barbara Rose, Mike's wife, they own the place. I'd met Frainier a few weeks before, and his invitation to see bread bakers at work was irresistible.
The 44,000-square-foot bakery - grown from 440 square feet when Semifreddi's was founded, in Kensington in the '80s - is in an industrial park, a kind of gourmet factory ghetto in which their neighbors are fellow foodies, including Peet's, Pacific Rim Produce and Dunsuemor madeleines.
The wonders of the visit included a glimpse of a person-size blob of raw dough being plopped down by mechanical device, fleshily settling with a figurative sigh onto a surface on which it was to be kneaded. To me, this evoked a scene in an old Italian movie in which a bare-bottomed woman of a certain age and a certain size got into bed. Keeping this image in mind was useful in maintaining deliberate speed in the consumption of the biscotti with which we left the factory.
On Monday, distribution manager Craig West dropped off four boxes of pastries, which arrived just about the same time as the news that state Sen. Loni Hancock had named Semifreddi's Small Business of the Year in her district. My reporting that news, of course, has nothing to do with those boxes of pastries. I am doing my best to avoid getting crumbs wedged between the keys of my computer. 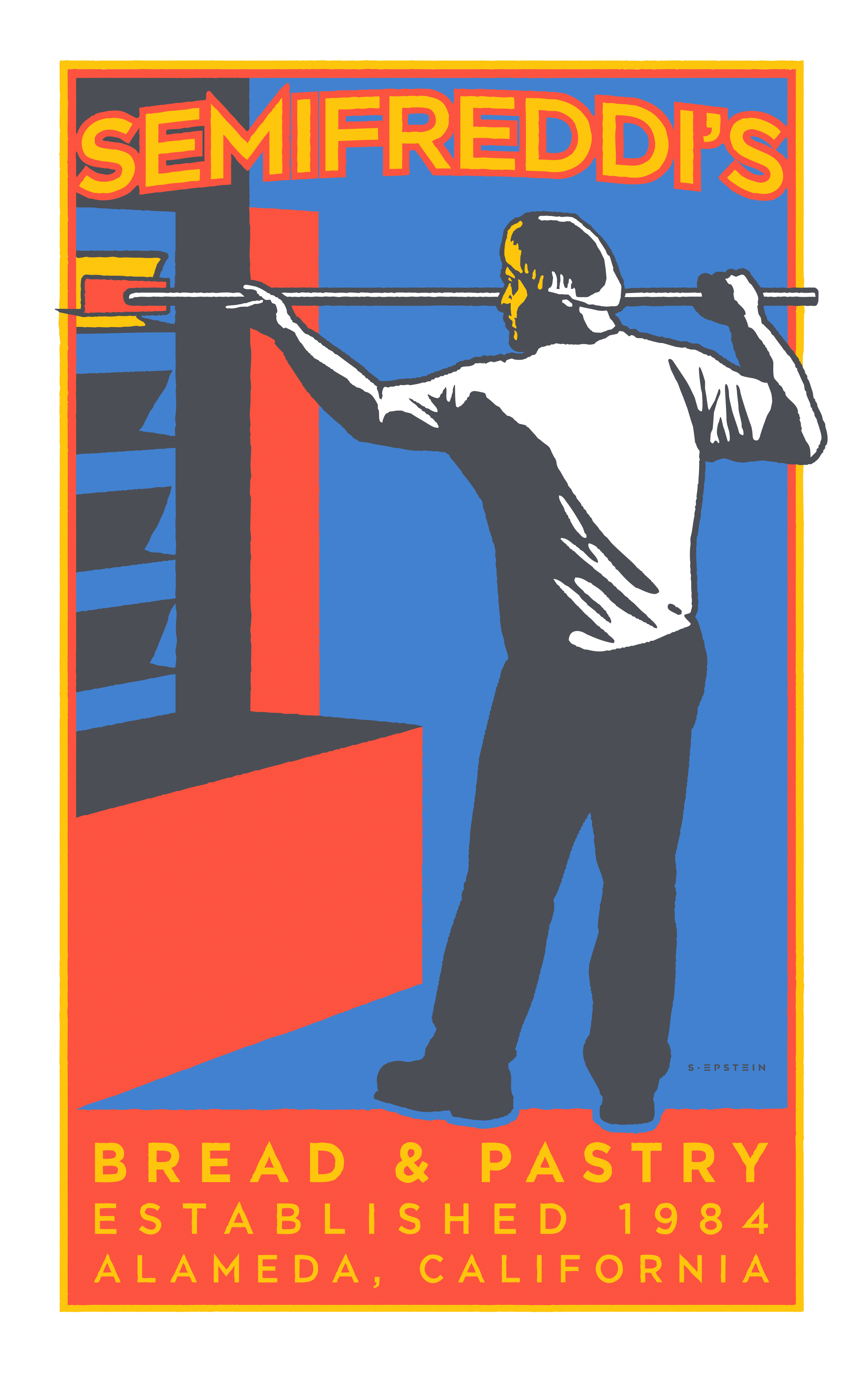 ​​​​​​​
Baking is our passion. Providing you with the freshest and highest quality breads and pastries at a reasonable price is our goal. We search the world for the finest ingredients; fennel from India, poppy seeds from Australia and the Netherlands, cinnamon from Indonesia, vanilla from Madagascar, and flour milled in Oaktown (Wurd!).

​​​​​​​We are and always will be self-proclaimed bread and pastry nerds.

Home
Our Story
Products
Where to buy
Breaducation
Community
​​​​​​​Contact